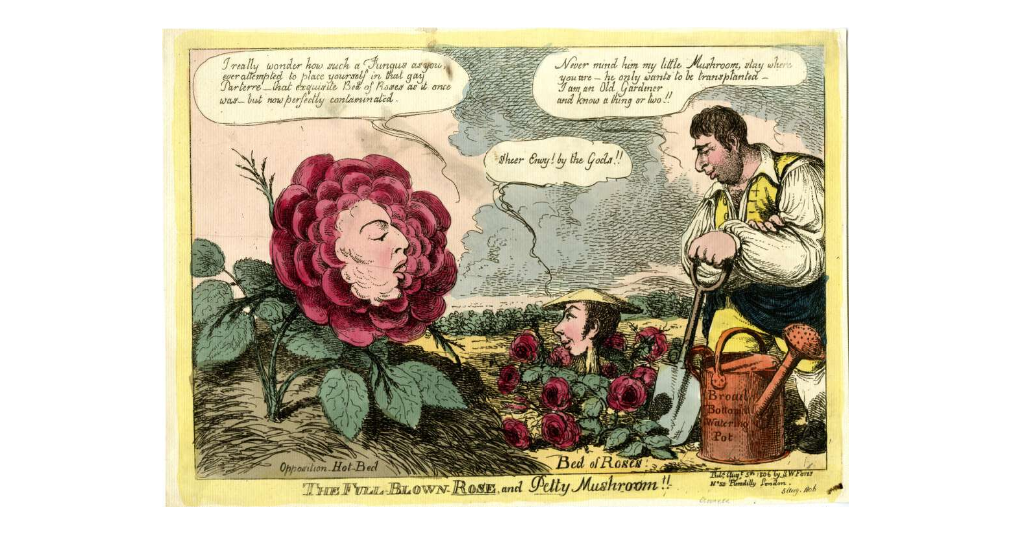 George Rose’s surname would later serve as ammunition for political cartoonists wanting to make sure their depictions of him were correctly identified but, before his career as a politician, it linked him to Clan Rose, originating in the Scottish Highlands. Born in 1744, Rose was adopted at the age of four by his maternal uncle after his father was implicated in the 1745 Jacobite rising. It was this uncle that sent him to Westminster School.

While many Westminster Head Masters kept meticulous entrance books, William Markham either did not keep such records, or they have not survived. It is therefore not possible to specify the exact dates of Rose’s time at the school, but his attendance is confirmed from his own letters and diaries.

We cannot make any certain claims about Rose’s opinions of Westminster School and our records from the eighteenth century are not fulsome when it comes to day-to-day experiences of pupils. However, families would often send multiple generations to the school, indicating some kind of respect for the standard of teaching, if nothing else. Rose’s eldest son was educated in Geneva, and his younger son in Winchester and then at Eton, despite their father’s continued connections to the borough of Westminster through politics. Assumptions could therefore be made that Rose held little affection for the place he received his education.

By the age of fourteen, Rose had left school to join the Royal Navy and served in Saint Malo and the West Indies. Wounded twice, he retired from the sea aged eighteen and found himself without any income when the uncle from whom he expected an inheritance died without making a will. Through one of his uncle’s friends, Rose secured a position as Deputy Chamberlain of the Tally Court and Clerk of the Exchequer Records.

For the two decades following his navy career, Rose collected offices at Westminster: Keeper of the Records at the Chapter House, Surveyor of the Green-wax Monies, Secretary to the Board of Taxes, and Junior Secretary to the Treasury. It was Rose’s connection with William Pitt the Younger that significantly raised his status in politics. Pledging allegiance to the new Prime Minister, Rose was made Senior Secretary to the Treasury in 1783. Managing elections and public relations, Rose was constantly required at parliament. He became MP for Lymington in 1788 and enjoyed an annual income of £4000.

Despite Rose’s support for Pitt, they disagreed on a few key issues, most notably parliamentary reform – one of Pitt’s proposals would have removed the Christchurch seat that Rose held from 1790 until his death – and the abolition of the slave trade. When Rose married Theodora Duer in 1769, he had married into a slave-owning family. He purchased land in Dominica with two of his in-laws four years later. Personally profiting from the continuing existence of the slave trade, he publicly opposed abolition, stating ‘we are nevertheless to have it again year after year till it is stopped by some horrible mischief in the islands; this philanthropy and humanity will end in blood and confusion’. Rose suggested regulation of the trade through import tax rather than abolition, with proceeds being applied to slave welfare. His property and enslaved people in Dominica would be settled on the couple’s eldest son, who would later make claims of several thousand pounds upon the abolition of slavery.

Rose died in January 1818, with an obituary remembering him as ‘up early and late, and with a total disregard of amusement, was always and totally in his business’. Public opinion of him had been mixed, but he claimed that his children were fiercely loyal to him, and ‘had never caused him an hour’s pain’. Both of his sons would go on to be members of parliament, although William Stewart Rose preferred translation and poetry to politics.