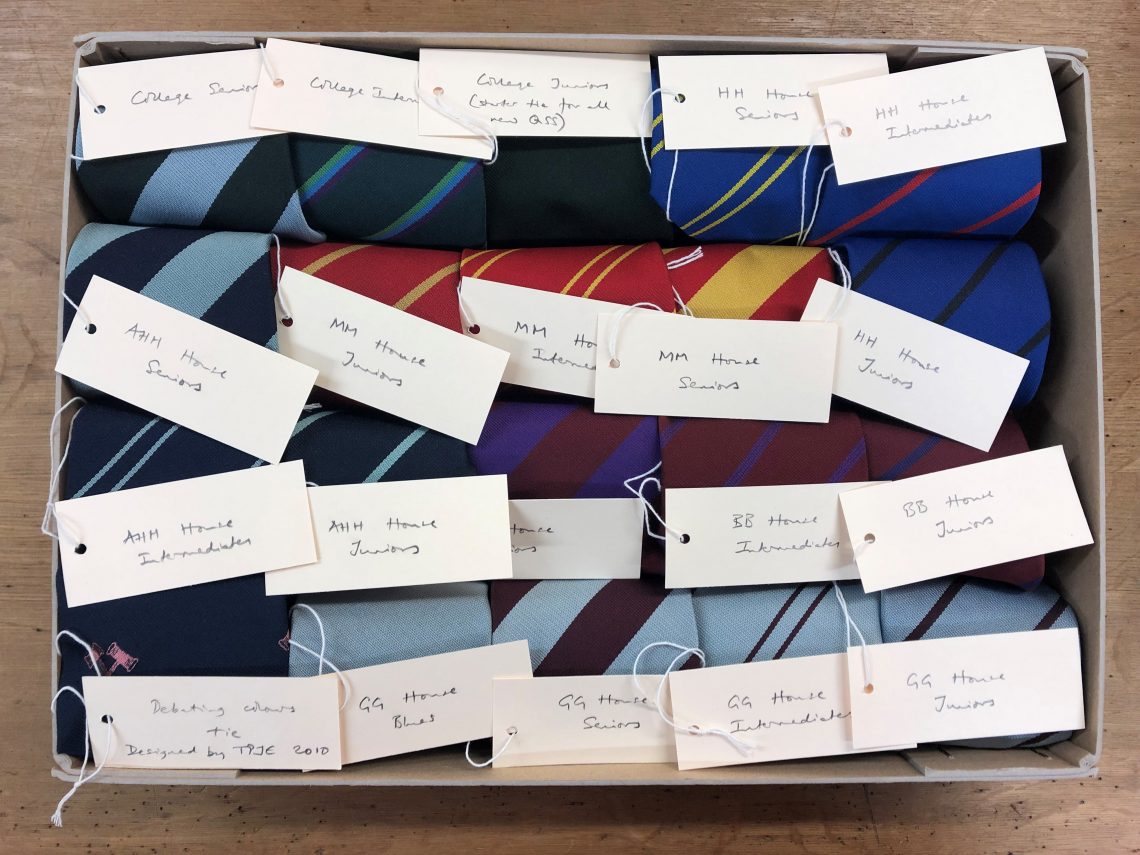 Three Fifth Form pupils, inspired by the plethora of school colours around them, were keen to know which of the school’s eleven houses was the first to have a house tie. Elizabeth Wells and Tom Edlin set out to investigate…

Initial research indicated that ‘the modern necktie emerged around 1860 when men began knotting their scarves like the reins of a “four-in-hand” carriage. The first “club tie” appeared in the 1880s when the Exeter College rowing team removed the striped bands from their hats and tied them around their necks.’  So, when did Westminsters adopt the new fashion?

The first port of call was to examine the school’s photographic record. Our earliest house photographs do show the pupils from Grant’s, Rigaud’s, Ashburnham and Homeboarders wearing neckties in the 1870s and 1880s. As the images are in black and white, it is difficult to identify colours, but it is apparent that a range of shades and patterns are on show. It seems unlikely that these ties represent ‘house colours’ or sporting colours, known as ‘pinks’. It is more probable that at this early stage ties were unregulated.

In June 1892 the topic was addressed by an Elizabethan editorial entitled ‘On Dress’. Looking back at a photograph taken a mere decade earlier, the author expressed shock at the sight of ‘a young and apparently healthy Town Boy wearing an Eton jacket of liberal cut and superfine gloss, and underneath it—proh pudor! — a coloured waistcoat. A coloured waistcoat!’ He confirms that pupils had since become ‘convinced of the dignity of dark clothes—sub-fusc., in academic phrase’ and concludes with a diatribe about the ‘heinousness of colour in [ties].’ This trend appears to have been formalized from at least 1901, when a school prospectus notes that: ‘Dress shall be simple, without bright colours. White shirts, black neckties, and tall hats are worn by all; and Eton jackets and collars by juniors.’

Of course, one of the great difficulties in researching historic costume is that textiles rarely survive. At Westminster we are lucky to have a small collection of clothing, some of which was recently conserved by students at Glasgow University. Items treated included some striped and coloured, square neck-ties. However, they were found to be of synthetic fibres and therefore date from the mid-20th century. Our collection of more traditional style neck-ties date from the 1990s onwards. We have a full set from the past thirty years, which Mr Edlin has identified and labelled. In addition to house and sporting ties, there are now a large number associated with other school societies and activities, from the ground-breaking general knowledge tie featuring owls holding the key of knowledge to the crossed gavels of debating and the of-its-era Environmental Society design.

Even within this set of recent samples, though, there has been change afoot. Since a slightly opaque conversation with then Head Master Stephen Spurr in the Common Room nearly a decade ago, Mr Edlin has been ‘Master i/c ties’ and taken on a few sporadic (but necessary) corrections and redesigns.  House Seniors from Rigaud’s and Liddell’s have been returned to their authentic pre-2000 ‘blocks’ of colour rather than the unappealing triple-stripe, while Liddell’s Inters and Juniors have revived the House’s full colour scheme.  The Hakluyt’s ties have been converted to the proper scheme of ascending stripes in the true House colours (Leicester City blue and Malaysian yellow, as the first HH Housemaster Dave Cook stipulated!), with the phasing out of the anomalous red and black stripes in the Inters and Junior ties. College has gained a proper set of Lower School ties for the first time, and the precedent of the ‘Grant’s Blue’ as a full-colour tie has now been followed by others, with the Dryden’s Scarlet arriving to some acclaim, the Ashburnham Turquoise to muted consternation, and the Rigaud’s Full Orange to considerable horror all round.

The expansion of ‘full colours’ for co-curricular activities has also inspired new designs for chess, bridge, MUN and – most recently – bell-ringing.  Requests for new ties regularly surface, and an uneasy ‘policy’ of sorts tries to exercise some control with the principle that societies linked to specific academic departments do not all get a tie. Limited space in the school store and the fact that tie orders need to be of at least 50 to be economic have meant that Mrs Lancaster has been known to groan when the ‘Master i/c’ appears with another new design… though an attempt has also been made to revive the purchase and wearing of some semi-forgotten ties which are still very much in stock, notably the ‘out-of-season’ full and half pinks ties, the latter being probably the finest design of them all (a zig-zag pink stripe on black…).

Having hit a dead end with the investigation of actual ties in the collection, Ms Wells decided to approach the problem from a different angle, and instead research ‘house colours.’ We knew that house colours must have been in existence for some time as when Busby’s was created, in 1925, colours were selected at the point of foundation, inspired by a dining room carpet belonging to the first Housemaster. (Later founding Housemasters also played a major role in picking colours, often with a theme in mind; the Milne’s colours in 1997 were the yellow and red of Winnie-the-Pooh in his [Disney] jersey, once the suggestion of mini Poohs had been vetoed on the grounds that House ties need to be stripes…) The first mention of the award of house colours occurs in The Grantite Review in 1884, and the ‘house notes’ section of The Elizabethan regularly records their award from 1894 onwards. At this point colours were awarded exclusively for sporting achievements.

The need for house colours appears to have derived from the increasing popularity of inter-house sports. In cricket and water, distinguishing between opposing teams was not difficult, but in football errors could easily occur. Initially, house identities were not strong and the main form of division was between Queen’s Scholars and Town Boys (non-scholars); the former generally wore blue and the latter red, though without colour-fast dyes this really meant pale blue for the scholars and pink for the rest, explaining the origins of our main school colour.  A Grantite vs. non-Grantite game took place in 1857 and boys in the Rev. B. James’ House (Rigaud’s) occasionally played as a unit in the 1860s. Dale’s, a boarding house which had a brief existence in Barton Street, was founded in 1878 as the school grew in numbers. Later that year the Town Boy Ledger records that ‘Dr. Scott [the Head Master] has given permission for the house elevens at cricket & football to wear caps of a distinguishing colours. The caps for College are to be dark green and light blue, for Grant’s, chocolate & light blue, for Rigaud’s, black & orange, & for Home Boarders [now Wren’s house] crimson and light blue.’

These are, of course, with slight changes of shade, exactly the colours those houses still wear.  Caps are no more, but in 1997 – nearly a century after the idea of distinguishing jerseys in house colours was first mooted – the t-shirts for house competition finally arrived.  The need to ensure the main colour of each was distinctive, to ensure clarity in any house fixture, did have one unfortunate consequence: although most houses got t-shirts in the ‘house tie colours’, a few were anomalous. The Wren’s t-shirts could not be pale blue (taken by Grant’s) or mulberry (Busby’s), so were black with bright pink lettering, while Milne’s could not be scarlet (Dryden’s) or yellow (Liddell’s) so was left with a compromise bright orange.   The pale blue ‘Liddell’s’ on the yellow t-shirts also moved away from the ‘real’ house colours, and as t-shirts have been ever more visible in school life, some confusion has developed over what the ‘true’ colours are. The answer is that ties are always the answer…