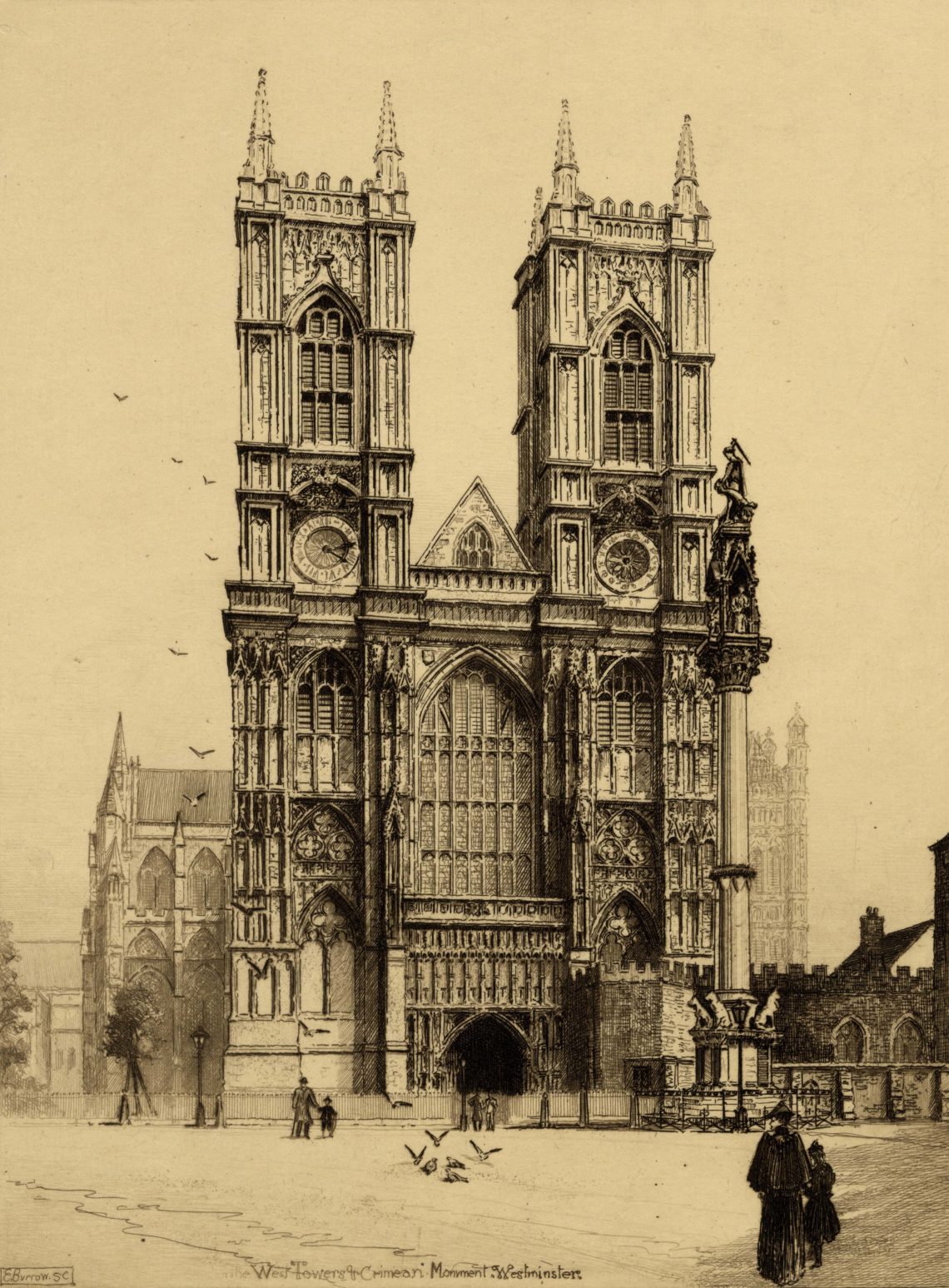 The pink granite column which stands in Broad Sanctuary, opposite the Hawksmoor Towers at the west front of the Abbey often goes unnoticed by the crowds of tourists that gather there each day. Up until recently, even if they had wished to know more about the monument they would have struggled to decipher the worn inscriptions on the plaques around its base. The elements, and pollution from London traffic, had not been kind to the ornate carvings at the top and bottom of the column.

Now, however, thanks to the generous intervention of The Elizabethan Club, the memorial has been restored and its letterings renewed. For this seemingly inconsequential construction in fact has important historical significance. The column was erected in 1861 to mark those Old Westminsters who had died fighting in the Crimean War (1854-56) as well as those who lost their lives suppressing the Indian Mutiny (1857-58). It is extraordinarily rare: one of the earliest war memorials in the country to commemorate a group of named individuals, and certainly the earliest war memorial of any school. It cannot claim the distinction of the Franco-Prussian War memorials, which were the first in Europe to commemorate rank-and-file soldiers by name – as all the Old Westminsters who fought and died were officers – but each is accorded his place on the memorial, from Field Marshal to Cornet. The inscription, by Under Master Rev. T. Weare (OW) reads: 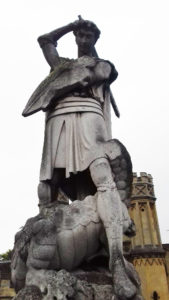 A statue of St. George slaying the dragon stands on top of the memorial.”To the memory of those educated at Westminster School who died in the Russian and Indian wars A.D. 1854-1859 on the field of battle or from wounds or sickness, some in early youth, some full of years and honours but who all alike gave their lives for their country. This column was erected by their old schoolfellows in token of sorrow for their loss and of pride in their valour and in full assurance that the remembrance of their heroism in life and death will inspire their successors at Westminster with the same courage and self- devotion”

We have remarkably few records concerning the erection of the memorial in both the School and the Abbey’s archives. It is possible that the documents were destroyed during the Blitz, or that they were never lodged at Westminster at all and remained with the architect responsible, Sir George Gilbert Scott or the committee formed to decide on the site and form of the monument. We know that the column was paid for by subscriptions raised by Old Westminsters and that fund raising commenced in 1857. The lions at the base are said by Lawrence Tanner, in his work Westminster School: its buildings and their associations, to have been designed by Sir Edwin Landseer.

The memorial was not uncontroversial at the time, and the First Commissioner of Works, William Cowper, was questioned about it in the House of Commons on 17th April 1861, with a view to preventing its erection, which had already begun. Presented with a fait accompli, Cowper decided it would be best not to remove the memorial, but noted that: 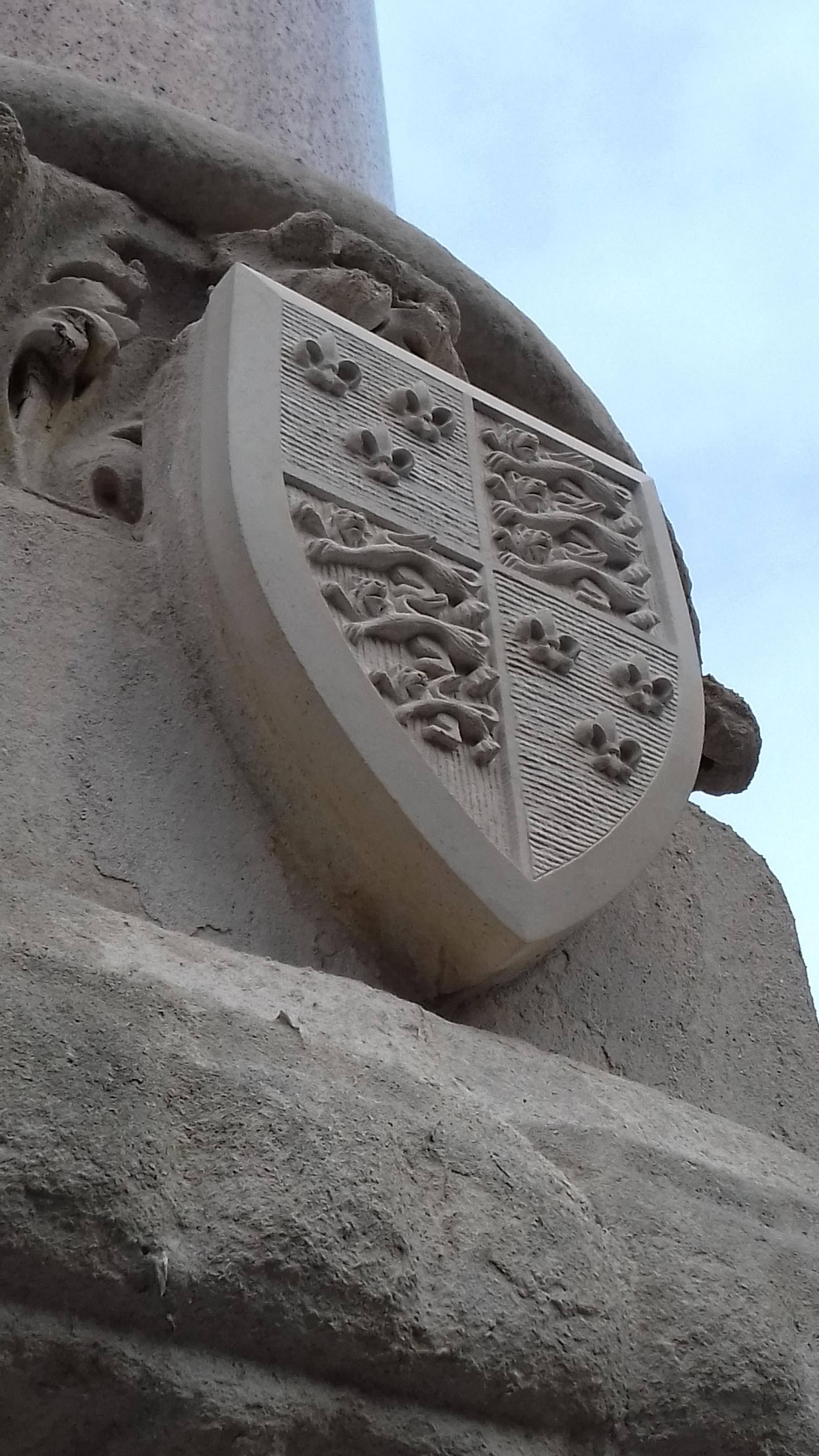 ‘if my assent had been asked to this monument, I should have hesitated to sanction the extraordinary incongruity of placing statues in the mediaeval style on a classical column.’

His comments are perhaps less pertinent today, over 150 years later, now that the war between gothic and classical styles has subsided.

One of the most complicated elements of the restoration work was the replacement of two shields carved into the Portland stone at the base of the column which were badly worn. One undoubtedly displayed the arms of the School and Abbey, the second was assumed to be the Tudor coat of arms, used by Henry VIII and Elizabeth I, with three fleur de lis quartering three lions passant. Recent work, by David Broomfield of the White Lion Heraldry Society, has suggested another possibility. The arms, which are on the south face of the memorial could be those of Field Marshall Lord Fitzroy James Henry Somerset GCB, 1st Lord Raglan who commanded the British forces at Crimea and whose name is carved onto the panel below. Lord Raglan’s arms also include the fleur de lis quartering lions passant, but with the addition of bordure compony – a decorated border. Without details of what was intended in the original design, it will remain a mystery.

Next time you visit the school or pass by on Victoria Street do stop and take a look at the memorial, and read the names freshly carved into its surface.