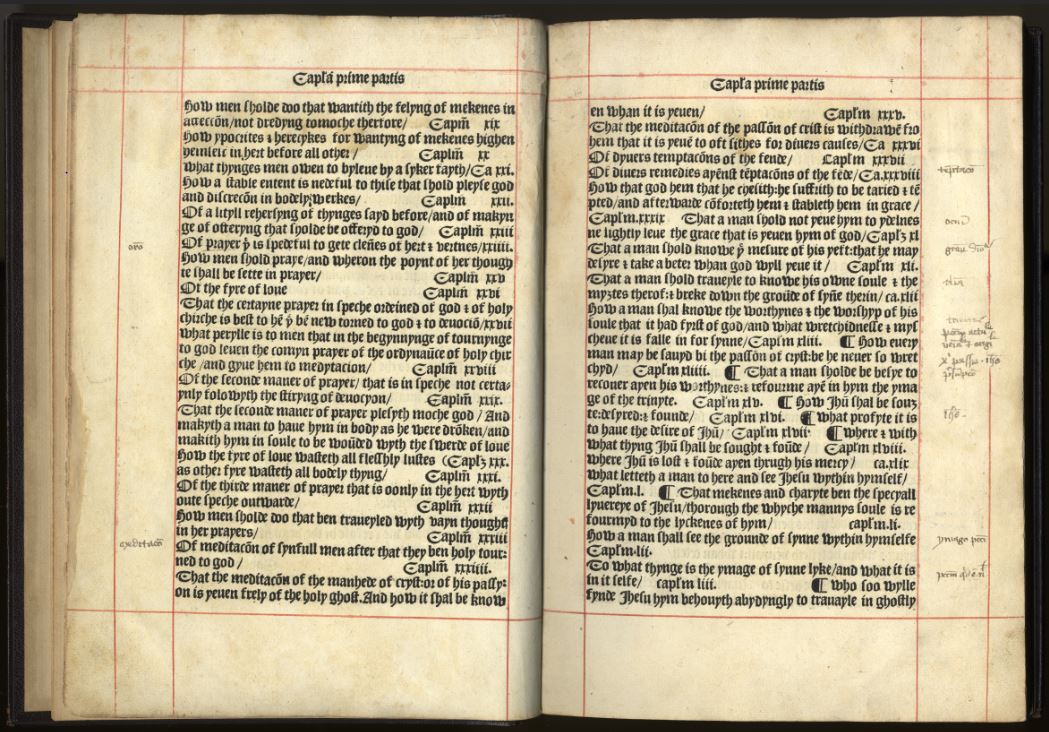 Article by Elizabeth Wells, Archivist, first published in The Camden, 2013

An incunabulum is a book, single sheet, or image that was printed — not handwritten — in Europe  before 1501 (the earliest examples of printing are from the East.  The Diamond Sutra which was discovered in a cave in China is the earliest complete survival of a dated printed book and was produced in 868 A.D.)  The origin of the word is the Latin incunabula for “swaddling clothes”, used by extension for the infancy or early stages of something.  Of an estimated 28,000 surviving titles, the British Library is easily the largest repository of incunabula with around 12,500 titles. Although the school’s collection of eight incunabula may seem small in comparison it is a fine representative collection.  This edition’s From the Archives will focus on just one of these volumes, Walter Hilton’s Ladder to Perfection, which unlike our other incunabula was printed in English at Westminster.

Hilton’s Ladder of Perfection is one of the classic writings of the English Mystics and among the major religious treatises written in fourteenth-century England it maintains a secure place.  The text is addressed to a female who has taken religious vows.  It is thereby connected to an extensive Western European tradition of works of devotion or spiritual guidance directed at women, written either in Latin or the vernaculars.  The finished work consists of two books of more than 40,000 words each and is notable not only for the careful exploration of its religious themes, but as a principal monument of Middle English prose.

Although we know relatively little about Hilton it is more than is known about many authors of medieval texts. He was a member of the religious order known as the Augustinian Canons, and died at the Augustinian Priory of Thurgarton in Nottinghamshire in 1396.  It is probable that he was trained in canon law and studied at the University of Cambridge. The exact date of his birth is unknown, but it is thought to be around 1343.

Hilton’s Ladder was one of the most popular religious texts of late medieval England, attested by the large number of manuscripts that survive – some forty-two containing one or both of the books.  Indeed there is a manuscript of Hilton’s Ladder in the school’s collection, although the subject for this article is the printed text.  The manuscript evidence suggests a fairly broad readership for the work, which certainly extended beyond the female anchorites who were its putative first audience.  Originally written in the vernacular it was translated into Latin by the Carmelite monk Thomas Fishlake, perhaps around the turn of the fifteenth century.  It is one of very few texts written in English to achieve wide circulation on the continent (the other exception being the work of Chaucer).

This wide readership, and the ease at which a manuscript could be acquired to copy from, made Hilton’s Ladder an ideal candidate for an early printed book.  The school’s text, produced in 1494, is the first printed edition of the work, and was made at the command of Margaret Beaufort, mother of Henry VII.  It was published by Wynkyn de Worde, an Alsatian who accompanied William Caxton to London in 1476 and helped him in his printing business, taking over when Caxton died in 1491. Worde built and improved on Caxton’s work and was considered the most important English printer till his death in 1534.

The work is quite different in appearance from books as we understand them today.  Initially printing sought to imitate manuscript form.  The type used in this work is designed to look like the ‘book hand’ writing traditionally used by the monks who had been mainly responsible for manuscript copying.  It was usual to decorate manuscripts with rubricated initialling (large capital letters at the heads of chapters and paragraphs were added later, painted in red – rubricated from the Latin).  The early printers left blank spaces for their capitals to be rubricated by hand, but printed the required letter in small type for the painter’s guidance.  Quite commonly the illuminating or rubricating has been omitted, either through carelessness, frugality or because the books were required in a hurry.  The text has however, been ruled, with a red margin.  This was done after printing, and on certain pages you can see that a reader has annotated the text before the lines were drawn.

The title page, setting out the works name, authorship and details as to its publication was also not commonly adopted at first – in fact it was one of Worde’s innovations after 1500.  This text plunges straight into the subject and all information such as the name of the printer and publisher and where and when it was printed were embodied in the colophon at the end of the book.  It is here that we see the initials of William Caxton, not used in the books he printed himself, but employed by Worde after his death.