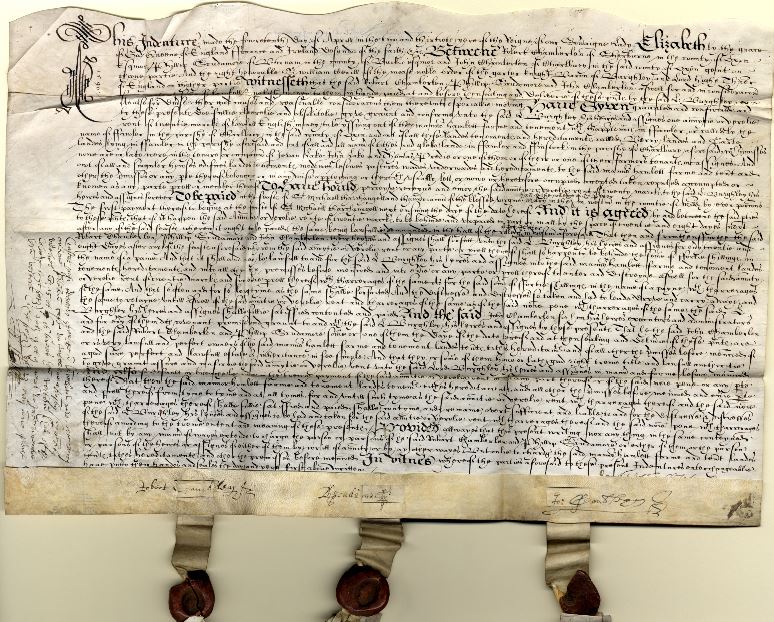 Article by Elizabeth Wells, Archivist, first published in The Camden 2013

This indenture, dating from 1594, is one of the earliest documents in the school’s archive which refers to the school directly (see the post on William Camden for another).  An indenture is a legal contract between two or more parties.  Written in duplicate on the same sheet, the copies would be separated by cutting a randomly jagged (toothed, hence the term “indenture”) line so that the teeth of the two parts could later be refitted to confirm authenticity.  Although often associated with labour or apprenticeship leading to the phrase ‘indentured servitude’ they were also commonly used to transfer property rights or debt.

In this case the indenture relates to the proceeds of the rent of some land and property in Fawler, in the parish of Charlbury, Oxfordshire.  Four years earlier, in another indenture held in the school’s archive the tenants, ‘Robart Chamberlen of Sherburne, in the county of Oxon esquire, Phillip Scudamore of Burnham in the county of Buck esquire and John Chamberlen of Charlbury in the said county of Oxon’ had agreed to pay a ‘yearlie rent of twentie marke of lawful English money’ (worth around £37,000 today) to Lord Burghley.  They were instructed to pay the money ‘in the hall of the college of St. Peter’, so it is likely that at this stage Burghley intended these proceeds to benefit Elizabeth I’s foundation of the Collegiate Church of St. Peter at Westminster.

The 1594 indenture is much more specific, it states that the money is given ‘in consideration of the great and affection and desire of the said Lord Burghley that children may be brought upp and trayned in vertue and learning in their youth whereby they may be made more able to serve in the church of God and in the commonwealth.  And for that the said Lord Burghley hath had good experience of the good and vertuous bringing upp and education of schollers in the Queenes free grammar Schoole within the church of Westminster and for the better maintenance and bringing upp in learning of such schollers which shalbe yearlie elected and chosen from Westminster to the Universities of Cambridg and Oxford’.  Perhaps Lord Burghley was unhappy about how this income was being spent by the Dean and Chapter as he notes the money is given ‘in trust, to bestow the same in money, books, or otherwise, a necessity or occasion shall be, upon such or so many scholars…in such sort, manner or form, as the Dean of Westminster, for the time being, and the two principal Electors that shall come from Cambridge and Oxford, and the Chief Schoolmaster of the said Free Grammar School of Westminster for the time being, in their good discretions, shall think most meet and convenient, and to no other use intent or purpose.’

By 1594 William Cecil, 1st Baron Burghley was reaching the end of his long life (he was nearly 78 when he died in 1598) and was perhaps thinking of his legacy when he signed this document.  Gabriel Goodman, Dean of Westminster for the majority of Elizabeth I’s reign had been chaplain to Cecil’s family and it was perhaps natural for their patronage to extend to the School.  Mildred, Lady Burghley, gave the school some of its earliest books, many of which are still in the school’s collections. Both Lord and Lady Burghley are remembered at the annual Commemoration of Benefactors.