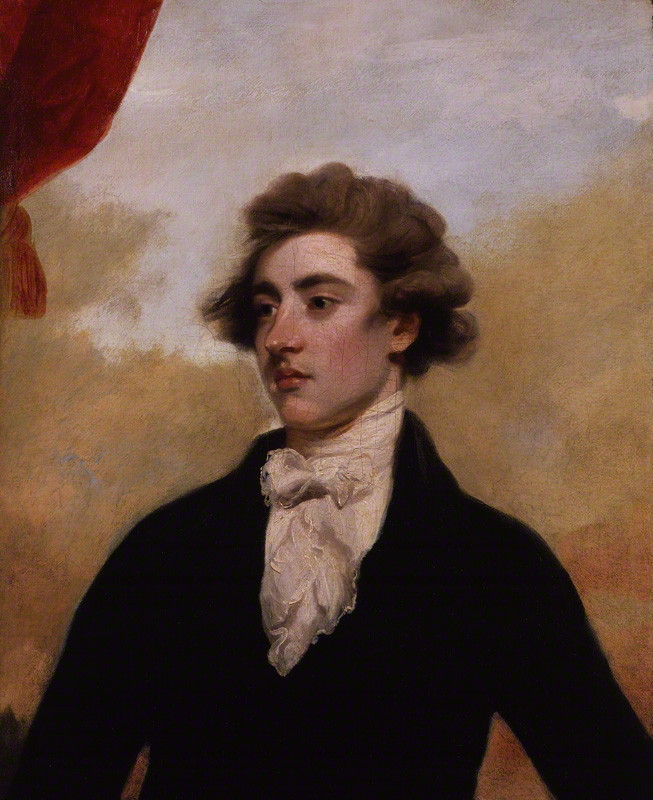 When Peter Beckford died in 1735, he left the majority of his estates, both in England and Jamaica, to his eldest son, also named Peter. Upon the death of this firstborn son two years later, a large portion of these estates passed to William. An inventory recorded his father as the sole owner of eleven plantations, part owner of five more, sole owner of 1737 enslaved people and part owner of 577.

William was the most prominent figure from the line-up of Beckford brothers and can be considered the most infamous. He was born in Jamaica and baptised on 19th December 1709, spending much of his childhood there before travelling to England at the age of nine. With his parents still abroad, he was under the care of Head Master Robert Freind, who would later speak of Beckford ‘as one of the best scholars the school ever had’.[1] While at the school, William Beckford befriended William Murray, subject of a previous blog post, and the two remained friends into later life, despite significant political differences.

After leaving Westminster, William continued his education at Balliol College, Oxford, and the University of Leiden, before beginning studies at the Hôpital des Invalides in Paris. These medical studies were abandoned upon the death of William’s father, after which he moved to Jamaica to assist in the running of the family’s estates. He joined the local militia unit and was elected to the Jamaican house of assembly. Serving alongside him in politics were brothers Richard, Julines and Nathaniel, and their cousin Ballard Beckford (also an Old Westminster). The Beckford family had a substantial presence in Jamaica and had a hand in overseeing legislation ranging from encouraging immigration of Scotsmen to the island, to setting duties on alcohol.

During this time Beckford spent in Jamaica, he reportedly became friends with Cudjoe,[2] the leader of a

group of Maroons in Cudjoe’s Town, located in the southern Jamaican mountains. These Maroons were the descendants of enslaved people who had escaped from their enslavers and formed independent communities which resisted British rule. Supposedly William Beckford took Cudjoe sailing and got him seasick. By the end of his life, William’s estates brought in an income of £40,000 a year and his generational wealth made his ten-year-old son a millionaire upon his death. Such financial privilege was generated by the labour of enslaved people on sugar plantations. It is thus evident why William Beckford held an anti-abolitionist stance, however it is less clear why the likes of William Murray, and particularly Cudjoe, maintained friendships with him.

After nine years in Jamaica, William returned to England and took up residence in London. He continued to manage his estates in Jamaica and grew his fortunes further through a mix of plantation profits and money-lending. He also turned his attention towards parliament and, in 1747, he was elected MP for Shaftesbury. In 1754, he swapped this seat out to be MP for London, a position he held until he death in 1770.

Despite his vast wealth and political success, William Beckford was not beyond criticism from his peers. In a pamphlet entitled A Short Account of the Interest and Conduct of the Jamaica Planters, the Beckford family was publicly demeaned for their role in British politics as absentee planters. Their ties to slavery, manipulation of the sugar market, and nepotism were all scrutinised. However, Beckford still had influential friends and became sheriff of London in 1755. In 1761, he was elected Lord Mayor, an office he held twice before his death. Alongside such promotions spread talk of his lack of charm, vulgarity and violent temper.

When William died in July 1770, it was from a fever said to be caused by political excitement. This assumption was a fair one, considering contemporary understanding of medicine, given the tumultuous few months he had experienced. The election of John Wilkes, a reformist and political agitator, to the House of Commons had ended in Wilkes being expelled by the government and his opponent reinstated. Following this event, William Beckford presented an argument to King George III, alongside a petition, complaining that royal support for the actions taken was unconstitutional. Whilst William was not an ardent supporter of Wilkes, the people’s vote had nevertheless been overthrown by ministers, and William voiced his opinion against this.

Two months later, Beckford once again spoke before the king. As it had been the first time, George III’s response was one of disapproval. In a violation of custom, Beckford gave a speech not previously submitted to the king, complaining of the conduct of the king’s ministers. Reportedly George III took as much offence with the impromptu nature of the address than with the content. While such a speech was criticised widely, William did have some supporters, including William Pitt the Elder, who saw it as a respectable declaration of the rights of the people.

It was only four weeks after this event that William died. A life-size statue of him delivering his speech to the King, atop a pedestal inscribed in gold with the words he supposedly spoke, was placed in Guildhall. This statue still stands today, although the City of London Corporation have expressed their plans to remove it. The government had opposed this decision under Historic England’s ‘retain and explain’[3] policy, however the Corporation still intend to replace the statue. To do so requires planning permission, as Guildhall is Grade I listed, so temporary solutions such as building a covering for the statue to obscure it from public view are being considered.

William fathered eight illegitimate children during his lifetime, but only had one son with his

wife, Maria Hamilton. This boy was William Thomas Beckett (1760-1844), who spent his life causing scandals and accruing both art and money. He was known at one point to be the richest commoner in England, with continued involvement in the slave trade until its abolition. That he did not attend Westminster seems only due to his father’s demise – once his mother had taken over his education, she had him privately tutored.

Another William Beckford did, however, attend Westminster School: William Beckford of Somerley (1744-1799). The illegitimate son of Richard Beckford, he was born in Jamaica in September 1744. When Richard died in 1756, his then eleven-year-old son inherited his estates in Jamaica and, after attending Oxford University and marrying Charlotte Hay, his first cousin, he moved to the island himself. The sum of his inheritance was four sugar plantations and 910 enslaved people, with a total worth of £120,000. While a meagre sum in comparison to the inheritance received by his far wealthier cousin of the same name, this was still a significant fortune.

William Beckford of Somerley spent thirteen years in Jamaica overseeing his estates, with plans to increase productivity and pay off his debts. Between the impact of hurricanes and the trust he put in the wrong people, he accumulated more debts than he paid off. When he returned to England in 1786, he was incarcerated in debtor’s prison just days after landing, after having been tricked by a friend into a meeting that ended in his arrest by bailiffs.

In prison, William Beckford of Somerley took to writing, both to pass the time and to try to appeal to those who could improve his position. In 1788 he published Remarks upon the Situation of Negroes in Jamaica, intended for private circulation. In it he argued for better treatment of enslaved people and suggested various changes that he felt ought to be made to the systems in existence. He did not, however, argue for abolition, and many of his proposed reforms centred around economic benefits to owners of enslaved

people, maximising work efficiency and reducing losses of enslaved people through malnourishment or suicide. While his views are certainly more liberal than his uncle’s, William Beckford of Somerley was not in favour of dismantling the system upon which his family’s wealth was based, even though he himself had left Jamaica practically penniless.

After also penning A Descriptive Account of the Island of Jamaica and A History of France, from the Most Early Records to the Death of Louis XVI, William Beckford of Somerley was released from prison in 1792, after six years. He had an income of £400 a year, negotiated in exchange for giving up his estates. Seven years later, he died as the result of an apoplectic fit while visiting the Earl of Effingham. A long eulogy published in The Monthly Mirror after his death describes him very generously:

In mixed companies, an unconquerable diffidence rendered him in general silent; but with a few select friends, his mind expanded, his countenance brightened, and he gave scope to conversation interesting, instructive and energetic… a heart for ever open, for ever alive to the misfortunes of others, and in those misfortunes entirely forgetting its own.[4]

William Beckford (1709-1770) and William Beckford of Somerley (1744-1799) shared a name and a family, but were described very differently by their contemporaries. Regardless, both men were supporters of the entrenched system of the slave trade. That William Beckford of Somerley died without control of any plantations was not down to choice, only circumstance. William Beckford, Lord Mayor, did much work to extend his influence in Jamaica, acquiring further estates and enslaved people. The Beckford family profited from the slave trade more prominently than any other English family of the time and it was not until the abolition of slavery that the family ceased to own enslaved people. William Thomas Beckford received almost £13,000 in compensation and used this money to build up his art collection until his death.

The legacy of the Beckford family’s links to slavery can be traced through not only art collections and buildings, but the Beckford surname itself. In some instances, this name is being removed from buildings and institutions. The Beckford and Smith School in Spanish Town, Jamaica was renamed in 1956. Beckford Primary School in West Hampstead, London is currently in the process of changing its name.

A leaflet created by ‘Beckford’s Tower and Museum’, a museum centred around William Thomas

Beckford, located in a tower he had built to keep some of his collection, draws attention to another way in which the Beckford name endures. Enslaved people were often given the surname of their enslavers, and after abolition, this name was shared by the many now free people once owned by the Beckford family:

In 1840 the Anti-Slavery Society held a convention to celebrate the abolition of slavery. One of the delegates, representing freed slaves from Jamaica, was called Henry Beckford.[5]

Dr Robert Beckford, an academic at Birmingham University, wrote an article in 2005 recounting his attempts to reconcile his surname with its origin, for Black people, as a ‘slave brand’. He reported the discovery of an enslaved man, also named Robert Beckford, who was a part of a rebellion in Jamaica in 1831.[6] It was through individuals such as Henry and Robert that the Beckford name was finally used to speak out again the slave trade.

[3] “Audit of Research into the Transatlantic Slave Trade and the Built Environment”. 2020. Historic England. https://historicengland.org.uk/whats-new/statements/slavery-heritage-research-audit/

[5] Beckford and the Slave Trade: The Legacy of the Beckford Family and Slavery. https://beckfordstower.org.uk/wp-content/uploads/2012/08/Beckfords-and-Slavery-leaflet-2007.pdf