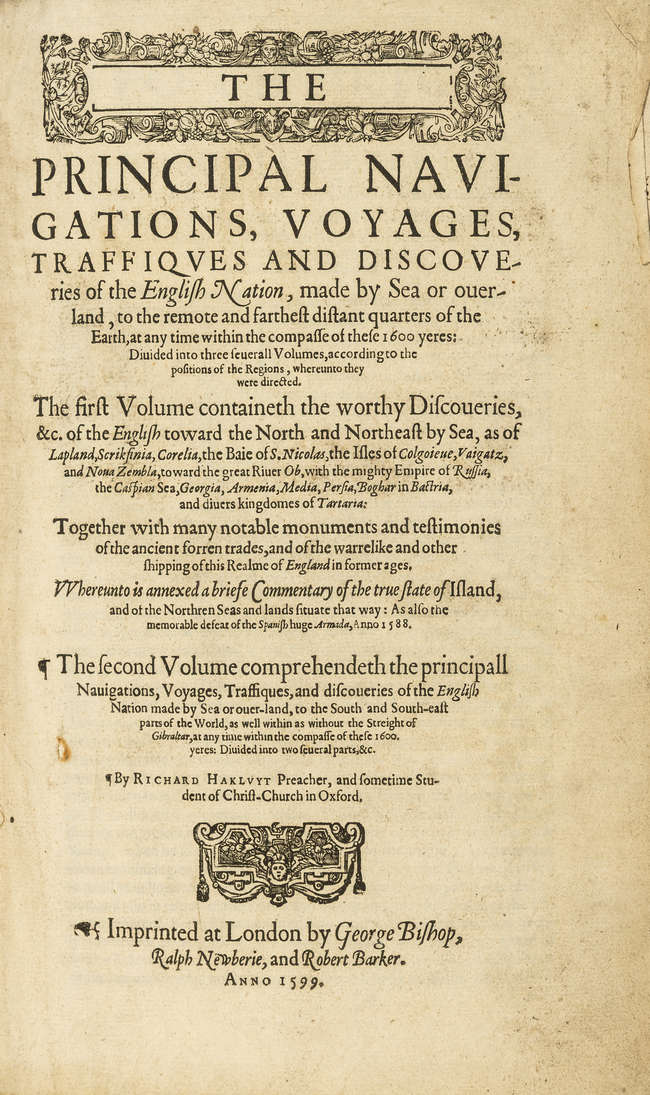 To most at Westminster School the name Hakluyt denotes one of the eleven school houses, but beyond struggling to spell it, they might give little thought to its origins. Its namesake, Richard Hakluyt, was born around 1552 and attended Westminster School alongside his brothers. Not much is known about Oliver and Edmund Hakluyt – all three of the boys were Queen’s Scholars and went on to either Oxford or Cambridge, but many of the specifics of their lives are unknown. Richard Hakluyt’s life has endured the centuries with the preservation of much more detail, mostly due to his prolific writing.

Hakluyt’s parents both died when he was young and he was subsequently raised by his cousin, a lawyer who worked in international trade. Geographical books and maps caught Hakluyt’s attention from an early age, and he sought out further information on the subject wherever he could. While at Oxford he was determined to read ‘whatsoever printed or written discoveries and voyages’, in ‘Greeke, Latine, Italian, Spanish, Portugall, French, or English.’ Despite taking Holy Orders, his interest in travel never waned and he is considered the first professor of modern geography at Oxford, where he would lecture and present maps and globes to students.

Particularly concerned with expanding national enterprises overseas, Hakluyt became a strong proponent of the exploration of North America. To support Sir Walter Raleigh, he composed a report in 1584 known as Discourse of Western Planting, in which he argued the political and economic benefits of the colonisation of Virginia. This was presented to Queen Elizabeth I, who awarded Hakluyt with a prebend at Bristol Cathedral. 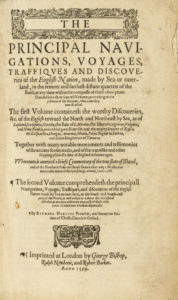 Hakluyt’s most well-known work was The Principall Navigations, Voiages and Discoveries of the English Nation, which was first published in 1589 in one volume, but later much expanded into three after the death of his first wife, completing many translations of travel writing from Portuguese, French and Latin. A rare late 16th century edition, containing an intact map of the world and several pages on Cadiz which were supressed, was recently subject to a bidding war and sold for £365,000! The widowed Hakluyt was granted the next vacant prebend at Westminster, and continued his work to promote the colonisation of North America. Despite his interest in travel, he only ever went as far as Paris and never completed a trip to the colony he so often wrote about. He received a special dispensation to travel to Virginia without losing his ecclesiastical appointments in England, but never made use of it.

Hakluyt died in 1616 and was buried in Westminster Abbey. He was succeeded in his work by Samuel Purchas, who drew on Hakluyt’s papers to produce further geographical writings. It is perhaps possible to suggest that Hakluyt valued his Westminster education, as his only son was a King’s Scholar in the early 1600s. Richard 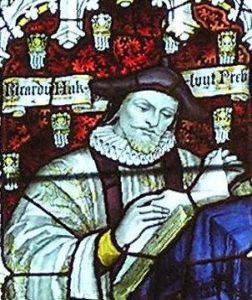 Hakluyt had amassed a fairly substantial fortune by the time of his death, inheriting his brothers’ property when they predeceased him, but his son would go on to squander this wealth. Hakluyt’s name is largely a forgotten one today, but it is preserved by the Hakluyt society, who continue to publish volumes of historic voyages, and a stained-glass window depicting him can be found in Bristol Cathedral.

It is difficult for us now to separate Hakluyt’s work promoting colonisation of territory in North America and the subsequent oppression and murder of indigenous peoples which resulted. Hakluyt’s biographer, Anthony Payne notes that whilst he is ‘sometimes seen as an imperial propagandist’ his ‘simple patriotic pride and a desire to add to geographical knowledge need not be discounted.’ Hakluyt sought to promote British interests against the expansion of European rivals, notably the Dutch, Spanish and Portuguese. It is important to note that Hakluyt in no way anticipated or endorsed the shameful behaviours that came to characterise British settlement of North America.